Andrew Sinclair has always devoted himself to film education. Through Lorrimer Publishing he produced and edited 70 classic screenplays ranging from Eisenstein to John Ford, Godard to Antonioni to Kurosawa, and personally saw through The Third Man with Graham Greene. It is hoped that these grammars of the good scenario will be reissued with the help of the British Film Institute and the Cambridge University Press and Library, which has all of Sinclair’s papers not at the Welsh Film Archive. 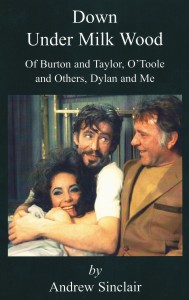 Down Under Milk Wood: Of Burton and Taylor, O’Toole and Others, Dylan and Me

This illustrated memoir is by Andrew Sinclair. He writes about his long relationship with the works of Dylan Thomas, and with the film industry, its leading actors and directors. He made David Hemmings into a star with Blow-up, which he also published beside 70 other classic screenplays. He has directed Richard Burton and Elizabeth taylor, Peter O’Toole and David Jason, Oliver Reed and Joanna Lumley and a host of other prominent players. For the centenary this year of the birth of Dylan Thomas, Sinclair’s classic film of Under Milk Wood is being shown by the British Council round the world.

Among his printed screenplays, he worked with Joseph von Sternberg on The Blue Angel and Orson Welles, Jean Renoir and Jean-Luc Godard, and even Graham Greene on the script of The Third Man. He is also the author of biographies of John Ford and Sam Spiegel. The book is a rich and riotous account of 50 years of filmmaking by a well-known historian and novelist from Cambridge University, which now holds his papers, and from Hollywood, too. Whichever was the right direction, he never knew.

All titles are printed and distributed by the Witley Press